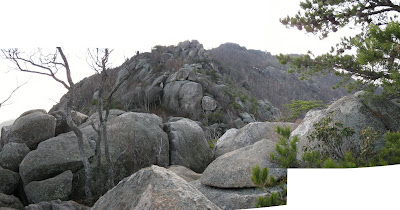 The picture is looking up the rock scramble section of the Old Rag Ridge Trail Dec. 27, 2008. Almost 60 degrees Faranheit virtually no ice. Click on it for better resolution.

Fee station closed so the hiker's devil voice grows a little louder and their angel's voice a little softer.

The warm weather saw increased traffic back on Old Rag. The upper lot was not only full but had a number of cars parked in places they probably should not have been and the road up to the lot had cars parked on both sides and squeezing the middle. Not sure a large rescue truck could have made it without scraping past or pushing some cars out of the way. Tried educating at least one car owner about the need to leave room for emergency services. Saw three dogs with owners on the Ridge Trial talked to them about the fact that dogs are not allowed.

I would guess that there had been between 150 and 200 hikers on the mountain today. Hikers appeared to all be having a good time out in the warm weather. I saw my last two hikers leaving the rock scramble just as I was entering it. I got a little bit later start than I wanted so that I could see my relatives off on their trip back home. Reached summit at just about full darkness or 18:00. No campers seen but I did see three inbound hikers on Weakley Hollow Fire Road at around 19:30. Noticed the large three foot diameter tree blocking Weakley Fire Road had been cleared. 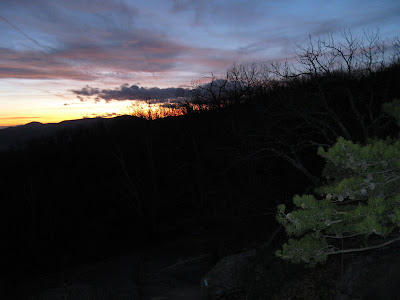