A long time ago PATC made a film about rock climbing and someone has converted it and put it up as a series of YouTube videos.

Part 3 of the YouTube series PATC DC History of Climbing shows a route called Hollywood being climbed on Old Rag.

I found this old footage fascinating for many reasons. For example, the gully at the base of the summit climbs used to be an open meadow and even in the old days it was common to clean the soles of ones shoes off by rubbing them on your pant legs before attempting a particularly difficult move.

The film can be found at:

A second short section of film demonstrating safety techniques of the day was also filmed on Hollywood and can found at:


There are seven parts to the PATC DC History of Climbing the other parts do not feature Old Rag but are interesting if you would like to know more about the early days of DC area rock climbing.

The fact that this route actually had a film made about it but is no longer in any guide books is indicative of the fact that a lot of Old Rags' climbing activity has gone unrecorded or unpublished.

There are still lots of undocumented lines on Old Rag. Scoping out a possible line, dreaming about doing it, planning how you are going to do it and then doing a first ascent is a totally different experience than repeating a route for which you have even a small amount of beta.

Do not be surprised if in the middle of your first ascent you suddenly come across an old rusty bolt or piton.

If you do,
bask in the mystical experience of wondering;
whose hands caressed,
whose feet danced,
whose muscles tensioned in coordinated movement,
whose mind intensely focused on the very same holds,
whose kindred spirit shared this route,
across the gulf of time.
Posted by Bob Look at 8:10 AM No comments: 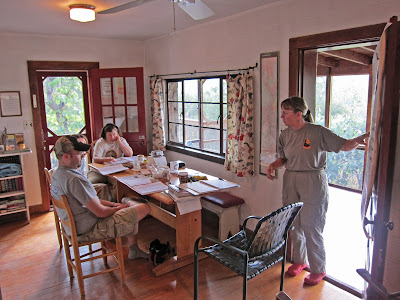 A shot of the class during their training hike. 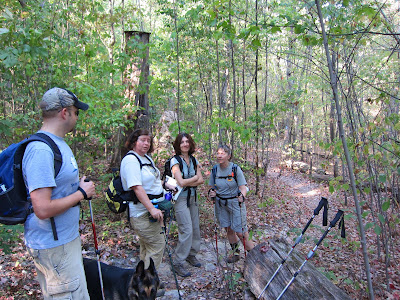 I did a complete circuit up the Ridge Trail and out on the Saddle Trail and fire roads. With the heavy overcast and threat of rain there were not many hikers on the mountain for a Fall Weekend. 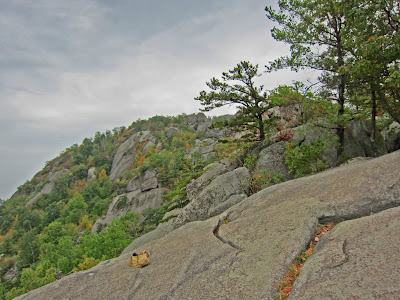 
The next picture shows some of the early fall color changes. Andy, Liz, Anne and myself were on the mountain. ORMS provided, interpretation, resource protection and aided a hiker experiencing severe cramps to get down to Old Rag Shelter for transport out of the park. 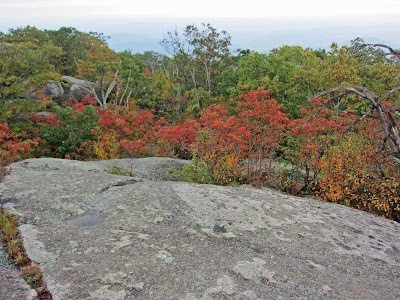 There were very early signs that Fall colors are approaching with some plants like the creepers starting to turn. I headed up the Ridge Trail while the three stewards who were going to stay over night and cover the mountain on both Saturday and Sunday headed up the Saddle Trail. SNP received an emergency cell phone call from Old Rag summit from an individual with a badly sprained ankle. The injured party was able to slowly and painfully start down the Saddle Trail from the summit. The upward bound ORMS group who had started up the Saddle Trail earlier in the morning were able to reach the patient fairly quickly. They escorted the patient down the Saddle Trail until they made contact with SNP's PSAR group which was also responding up the Saddle Trail. At this point the PSAR team took over the response efforts and the ORMS members were able to proceed back up the mountain to continue coverage high on the mountain and to get as much of the days training agenda done as was possible. Remember this is backcountry and you should plan on it taking hours for first responders to get to you.


Great weather. Looking up the Ridge Trail from first false summit and start of the rock scramble. Click on pictures for higher resolutions.

The picture below is of the view looking back at the first false summit from just below the cave. If you click on the picture then click on either the plus up looking glass, expansion box or other zoom function for the image you will see two hikers off-trail. Not only are they off trail but their approach and tentative furtive body motions and awkward technique told me they wer not experienced climbers.

There is no rule against going off-trail but please use good judgement. You are on your own recognizance. Be very careful of your safety, your group members' safety. Protect your hosts; the rocks, plants, and animals as well as the natural beauty of their home.

While on patrol I often see behavior that appears to be unwise. I get particularly concerned when a very experienced or skilled member of a group is coaxing or pressuring a less experienced members of their party to take risks they may not be ready for.

There are plenty of off-trail routes through the rocks that can be accomplished by novice climbers but which can result in serious or lethal injuries in the event of an unprotected fall.

The trail is purposely routed such that on the the "hard" parts the furthest one can fall is less than ten feet.

Having watched so much questionable behavior on Old Rag from a distance and at the same time believing there is an appropriate place for humans to challenge themselves with dangerous activities, I am resigned to the fact that I must apply a big uncertainty factor when judging what is acceptable risk and what is reckless behavior in the mountains.

I have had the good fortune of surviving plenty of my own misadventures. Partially by luck, my misadventures have only resulted in my experiencing great anxiety, fear, and temporary physical pains. In return, I have forged intense bonds while sharing harrowing adventures with close friends and also collected a set of good stories.

Kenny Loggins' Danger Zone speaks to a part of me. I like the Klingon's tradition of saying "It is a good day to die" when faced with mortal dangers. Even better, I like my climbing partner's and my tradition of giving each other high fives while exclaiming in unison "We live again" at the end of any of our more risky days.

Every visitor to Old Rag gets to script and live their own reality adventure show. While they can be the author, producer and the lead actor of their own show Reality still owns the stage and gets to write part of their script. Plan and prepare for Reality to interject unforeseen difficulties and mayhem into your show.

All that said, here is to hoping that all Old Rag misadventures turn out to be action comedies not tragedies.

If you are going to push the edge be responsible. Make your personal risk reward decisions with profound clarity. Celebrate your life by living intensely not thoughtlessly or carelessly. 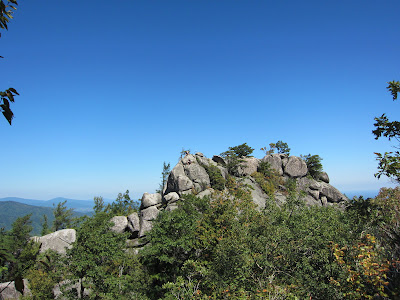 The formation pictured below is nowhere near the trail but it was a very neat pedestal that was holding a lot of weight like a flying buttress on a cathedral. A very heavy massive part of the cliff face depended on this pedestal with the hollow portal behind in order it to stay up. 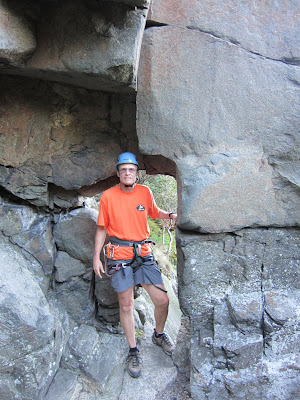 Lead steward Jeremy explaining anchor construction with stewards Dwayne and Anne on the top of the Skyline aka PATC wall. High Angle Rescue techniques have the goal of quickly but safely reaching, treating and extracting a victim located in a high angle situation. The methods used in high angle rescue borrow equipment and techniques from climbers but high angle rescue has very different goals than sport climbing and its methods while similar to those used by climbers are a unique art of their own. 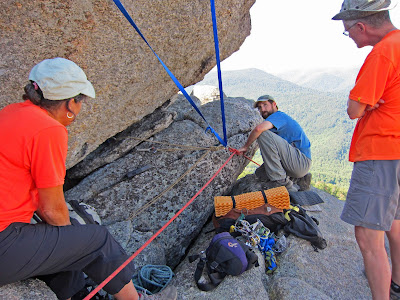 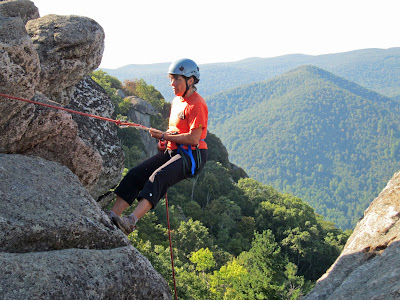 Steward Dwayne just below the lip of the cliff with lead steward Jeremy looking on. 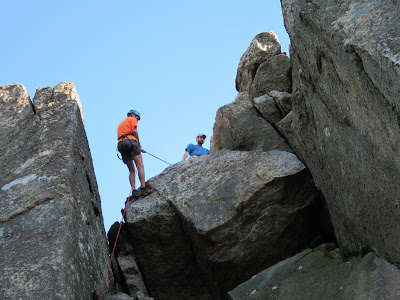 Dwayne at the end of his descent. 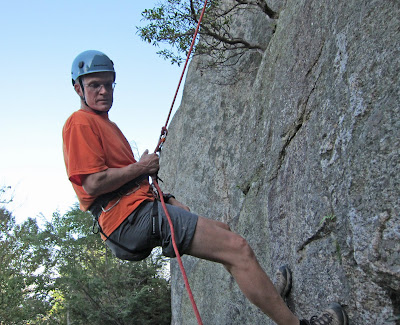 After descent practice ORMS moved to the summit and set up to practice rope ascent techniques. 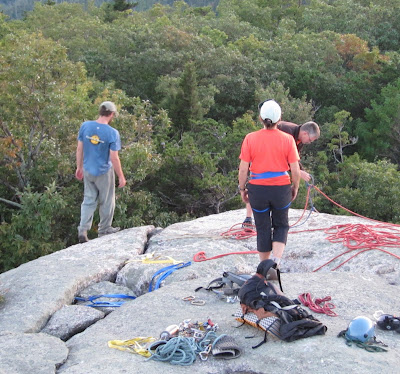 Stewards Dwayne and Anne practicing roped ascent techniques in the light of the setting sun. 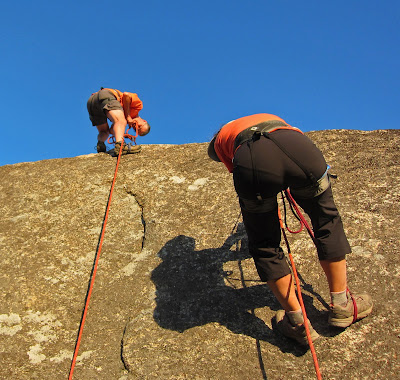 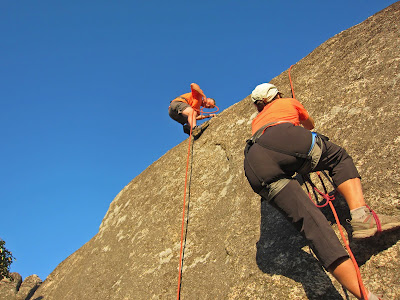 Lead steward Jeremy demonstrating how to ascend a rope using just one prusik knot and a foot wrap on the climbing rope to make upward progress. He also demonstrated using progressive back ties on the trailing climbing rope as one additional measure of safety in an environment were the the wrong combination of bad things happening results in lethal consequences. 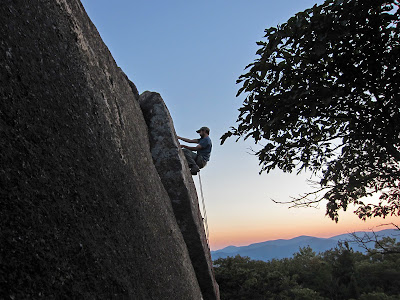 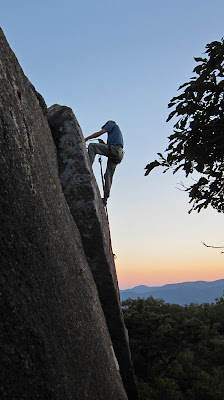 My first very crude attempt at a video posting.

Started Clear and Warm turned to overcast and showers.

The following pictures show an amazing carpet of flowers along a pasture I passed near Woodville on the way to the mountain. 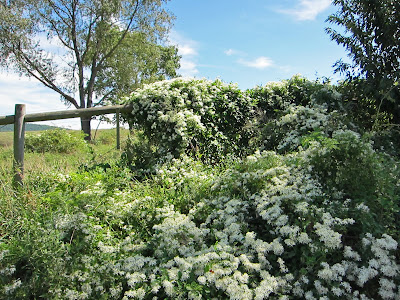 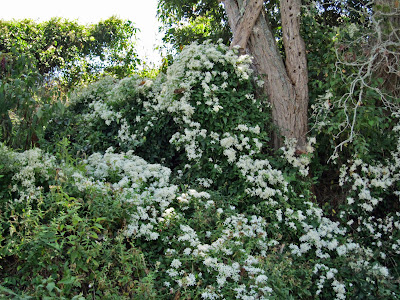 There is a new Ranger who will be working at the fee station.
Zach 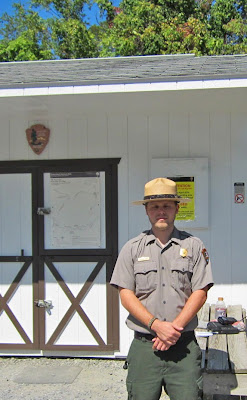 Looking up Ridge Trail from start of the rock scramble at R22. 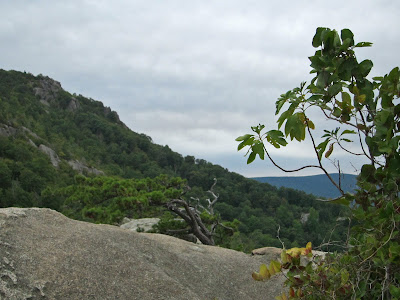 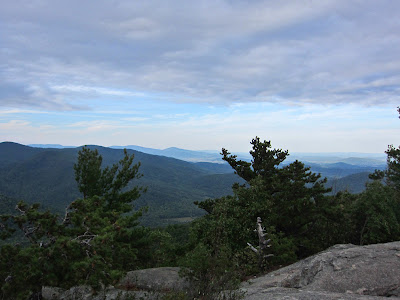 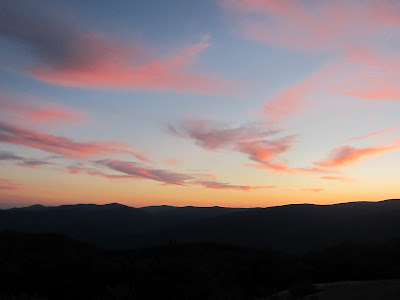 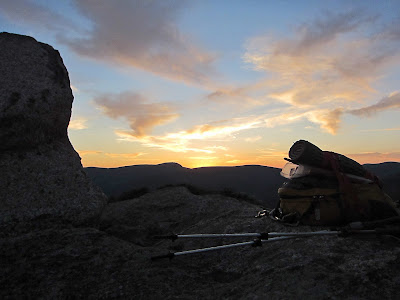 Click on the picture than use the plus eyeglass and slider bar for more detail. You can see a couple of hikers(one in white and one in blue) on the first false summit. This shot was taken from next to the chute.

The berries and nuts seem to be particularly bountiful this year. 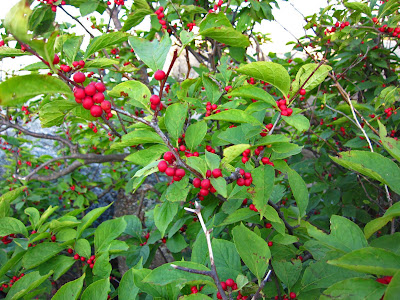 A picture of some Sedum just about ready to bloom. Hopefully I can catch a picture of it in bloom next week. 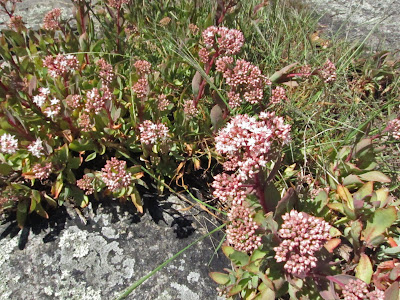 While taking the picture of the Sedum I realized I had an Old Rag inhabitant checking me out. This picture does not show it but the Mantis below was definitely following my movements. 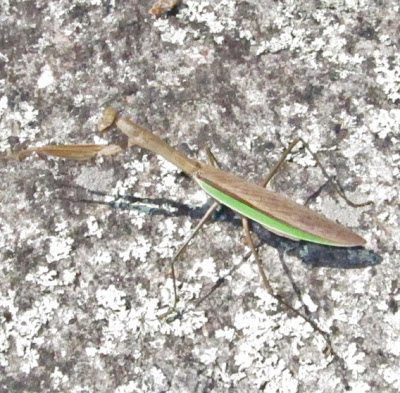 A shot looking down the chute. 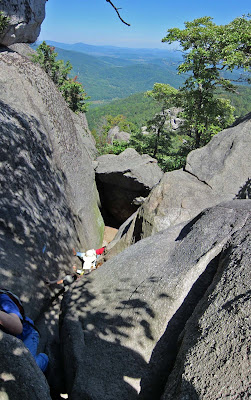 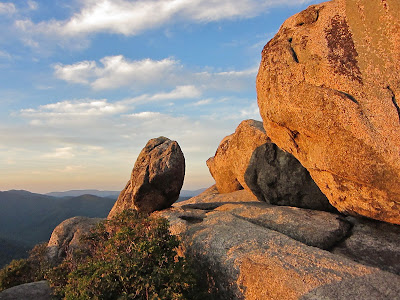 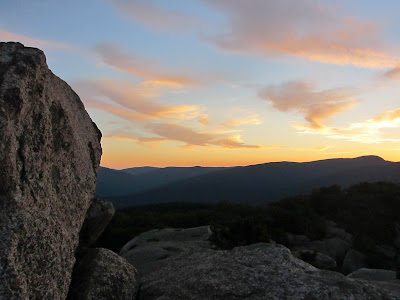 The following are panorama shots stitched together from multiple snaps. Double click and use the expansion hour glass and slider bar for more detail.

Yet once again I happened upon a Copperhead crossing the fire road. Not a problem as long as you have a good light to see them so as not to get too close or accidentally step on them. It seems the weather is still warm enough that they are still active mostly at night. As the days cool and nights get too cold they will switch to more daytime activity. Finally when it gets too cold they will head to their hibernaculums. 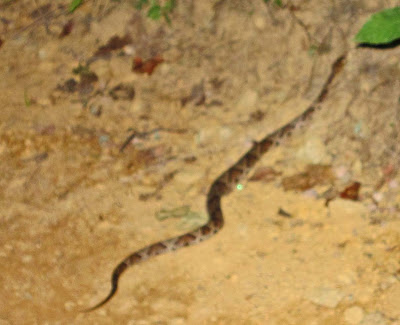 The first day of the ORMS(Old Rag Mountain Stewards) season was bliss. I am not sure why but some days I am bubbling over with talk and some days I just feel quiet. This was one of those weekends I felt very quiet and reflective.

The stewards taking a break on the summit. 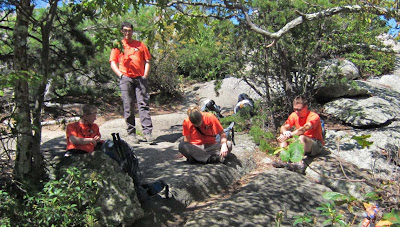 A stitched panorama from the top of Skyline aka PATC Wall

Two stitched panorama shots of sunset from the summit.