High forties and the skies were mostly clear. Low on the mountain the Ridge Trail was clear of any ice or snow just muddy. About half way up the Ridge Trail switchbacks a small amount of snow started to appear. Near the top of the switchbacks the ground was covered by snow with a tenth of an inch of ice glaze over the top. Above around 2,400 feet the rain earlier in the week had frozen on contact with ground and trees. All of Skyline drive was closed because of the ice. For a better idea of the ice conditions above 2,400 check out the pictures on both the Shenandoah Mountain Guides' post and the Silver Spring Wanderer's post for this same time period. Between the closure of Skyline drive and the nice weather there were the most number of cars (about 60 in the lower lot and another 15 along the road or in the upper lot) that I had seen in the parking lot since Fall.

I got a late start and had to leave early in order to make the annual PATC Trail Patrol dinner in Harpers Ferry so I only did an up and back to the No-Camping sign on the Ridge Trail.

I was able to do lots of interpretation and answers lots of questions on this day. I had some pretty long conversation with downward bound parties who had planned on doing the circuit but had turned around at the first false summit due to black ice coating the rock scramble.

I did get a chance to talk to a couple of groups who had managed to complete the whole circuit and they reported that they had to be extremely cautious.


PLAN AHEAD BE PREPARED
During this time of year, some type of ice traction devices will be a big help. Also keep in mind that responses to non-ambulatory injuries are going to take many hours(3 to 10 minimum) until help arrives. Once a victim and their party have stop exerting themselves they are going to chill down quickly. Not having additional layers to put on will almost guarantee a case of hypothermia for the victim and any members of the party who are tending them.

Because Old Rag Granite is dark in color and most of the rock scramble is exposed to good daylight sun it will often become substantially clear of ice and snow after just a few days of bright sunshine and warm temperatures. The switchbacks on the Ridge Trail and especially the Saddle Trail below Byrd's Nest Shelter are more protected from the sun and will often stay icy long after the rock scramble has become clear of ice and snow.

The following picture shows the parking lot at about 16:30. This picture only shows about half of the cars that had been in the lot around noon.

A picture from the Old Rag lower lot showing some of the ice and snow higher on the mountain if you expand the picture and look closely you can see some vultures or ravens on the nearest high point.

One of the Old Rag neighborhood dogs hanging out near the fee station. 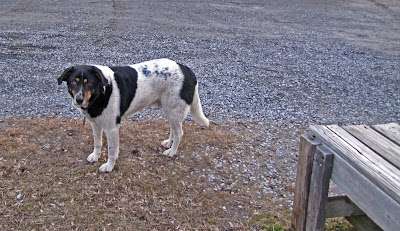 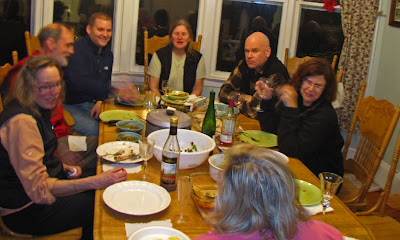 
I did an up and bag from the White Oak Canyon side of the mountain. The Saddle Trail between the two shelters was treacherous with ice but otherwise the snow and ice was mostly gone. Temperatures were in the low fifties.

Most pictures offer higher resolution if clicked on.

Five shots stitched together from Etlan. 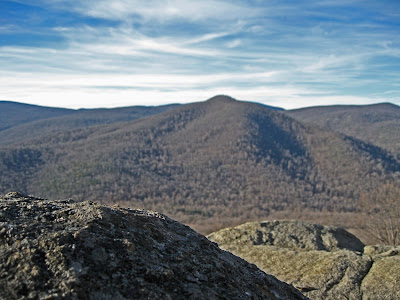 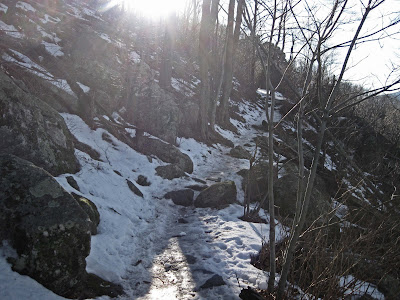 Some snow was left on the summit. 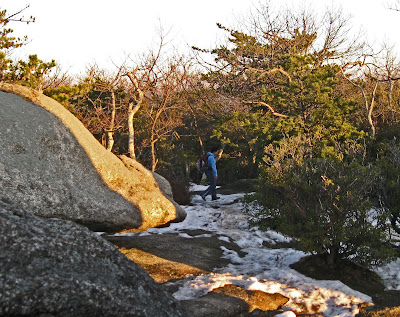 Long shadows looking down Ridge Trail towards Warrenton and Washington.

A series of shots leading up and past sunset. First one is ten minutes before. 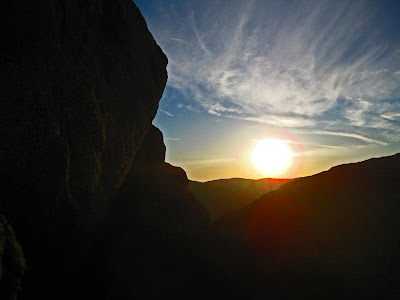 The next two are right at sunset. 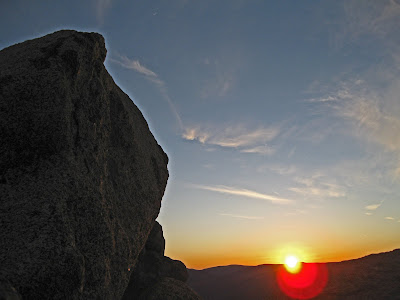 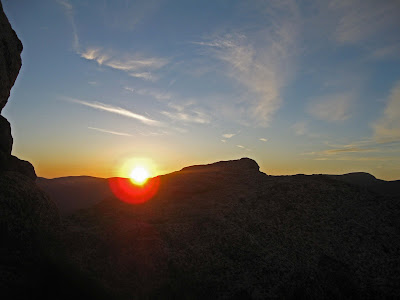 Had a very late start at 13:20 so only went up to the first false summit waited for dark and then came back down under headlamp. Despite the late start it was an interesting trip.
.
I was surprised to see a hearty group of climbers doing boulder problems low in the switch backs. Along with their crash pads they had very cold hands. It was in the low twenties and hard boulder problems require glove less hands to be placed on icy cold granite. Passionate mountaineers do funny things at times. I remember hearing about one fellow who in preparation for an upcoming mixed climbing mountaineering trip hiked holding snowballs in his bare hands so that he could acclimatize them for his upcoming trip.
.
Met a young lady who said she volunteered for Blue Ridge Mountain Rescue Group. She said she hiked Old Rag a lot so I encouraged her to consider volunteering for ORMS and provided her information on how to get in touch with it.
.
It was a good day to retrieve the garbage bag sized zip lock bag from near the last good camping spot on the Ridge Trail. With it being so cold there was no need to worry about the hornets/yellow jackets. The trail had very hard packed snow which in many places had transformed into ice.
.
When I got back down to the upper lot there was a party waiting on two members of their party and another party of two whom they had befriended near the summit. The two groups of two came out about ten and fifteen minutes after I arrived. The last group out said they were probably going to be sore from bruises received after falling on the icy trail several times. When I asked if they had slipped on the really icy part of the Saddle Trail they said no because they had traveled that part of the trail sitting down.

Have you ever tried to walk on a sidewalk that was not cleared of its snow, had been packed down by pedestrians and had turned icy from several days of thawing and refreezing? That is what many parts of the trail were like.

When this trail is coated in ice you can make it without any form of ice traction on your feet but it will be a lot more fun, go a lot faster, and be tremendously safer if you wear something that will grip on the ice. Think Stabilizers, YakTrax or MicroSpikes.


Does not look like much snow or ice but there was plenty. 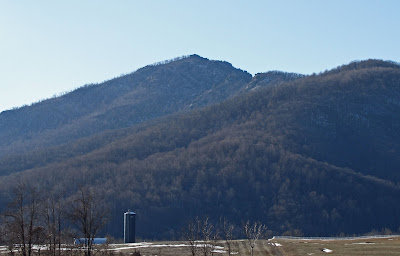 Very low on the Ridge Trail the sun was just sinking over the mountains shoulder at around 16:00. 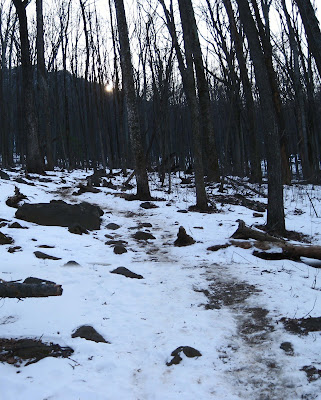 Just before the first false summit a good idea of how the trail looked higher on the mountain. 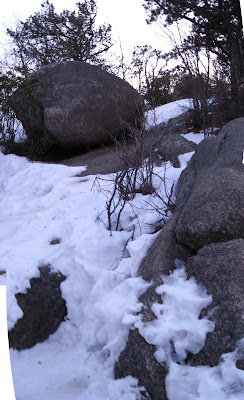 The classic look up the rock scramble from the point where you get your first views of Etlan. 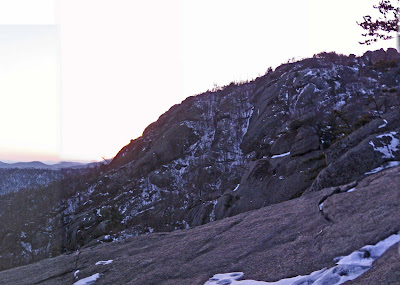 I hung out on the first false summit until it got pretty dark. I can see and hear all the way up the Rock Scramble to the top of the Chute so I waited in order to make sure there were no late parties coming down the Ridge who might need help because they got caught in the dark without lights. It was amazing how much colder I started to feel just hanging out around R22 for forty minutes. On the exposed ridge the wind was a fairly constant 10 miles an hour with gusts up to twenty. Once you were off the ridge the air was almost still.
Not really sunset since it is looking southeast but these colors are typical of Old Rags eastern horizon at twilight on clear weather days.

It was above freezing during the day and below freezing once the sun was low. The trail was mostly five inch deep packed snow having the consistency of a snow cone. My micro spikes made the trip a pleasure. I encountered several parties without ice traction equipment on their feet proving that the hike could be done on this day without any special footwear. That said, if you are wearing the right footwear you will not need to constantly concentrate on not slipping. There was no need for breaking trail. Prior hikers had trampled down the snow to a fairly solid base of four to six inches of fine grained corn snow. With my micro-spikes providing firm grips I found the trail much easier to walk than it is during warm weather because it is smoother and slightly padded.

The fire roads were mostly covered in thin crunchy ice or snow. There were already bare sections but most of the distance could have been skied. That said, even when the fire roads were snow covered they were very icy and would not have been much fun to ski. I am sure there were a few very rare days just after the big snowstorm when the skiing conditions were terrific.

For the last hour of my hike I walked with my headlamp turned off. A wonderfully large bright moon had climbed low into the crisp black winter sky accompanied by brightly twinkling stars. There is a special magic that occurs when the snow is crunching under your feet and a clear winter sky has a bright winter moon bathing the leafless snow covered woods in a dim silvery illumination.

GREAT START OF A NEW YEAR!


I try to take this shot from the same spot of the road so as to provide a reference of change through the seasons. Most pictures have higher resolution if clicked on but you may need to use the slider bars. 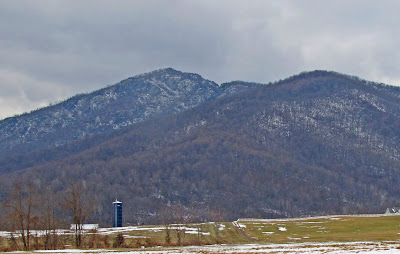 Start of the Ridge Trail. 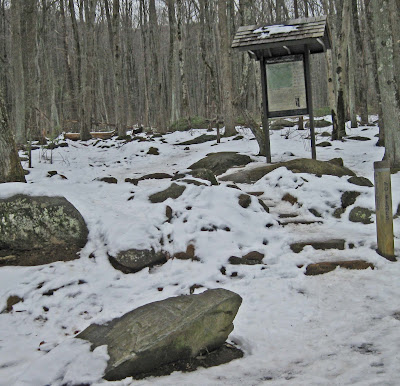 Looking back at First False Summit from below the cave.

Whales Head with ice. This area ices up. On most days you can pick a path around the ice. Looking towards Washington DC from slab just above the Chute.

From summit looking down the Ridge Trail.

Sunset looking towards Skyline Drive(closed this day) from the summit. 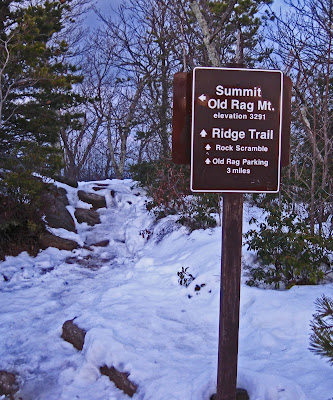